Hello! My name is Rob Grand, and I am a final year PhD student at the Mullard Space Science Laboratory. I work in the Astrophysics group, and my research focuses on simulating and analyzing spiral galaxies. In this, my first ever blog post, I talk about some of the research I have done over the past three thoroughly enjoyable years.

Spiral galaxies have fascinated astronomers for generations, and the theory behind their origin and evolution is still hotly debated in scientific literature to this day.  The most popular theory is the spiral density wave theory, developed in the 1960s. This describes the spiral arms as crests of a wave that propagates around the galaxy, much like tidal waves propagate on the surface of the sea. This was analytically derived by C.C. Lin & F.H. Shu in 1964, and has some clearly defining features:

However, over the past decade there have been an increasing number of studies that hold evidence against the spiral density wave theory. This comes with the recent advancement of numerical simulations and high performance computers, whose development allows us to scrutinize the dynamical evolution of spiral galaxies and the nature of spiral arms as never before.

For the last 3 years, my work at MSSL has focused on running and analyzing highest-resolution simulations of spiral galaxies using a state of the art full parallel Tree N-body smoothed particle hydrodynamics code, GCD+. These simulations include many physical aspects of galactic evolution such as hydrodynamics, star formation, supernovae and stellar wind feedback, radiative cooling and metal production and enrichment. The extensive information provided by this kind of simulation really enables us to examine in great detail many properties representative of real galaxies, but with the advantage of being able to explore their evolution in time (see the movie in Fig. 1).

For example, an important result from these simulations is that spiral arms are transient and have lifetimes of only ~100 million years. They are also recurrent features i.e. they are constantly appearing and disappearing, such that the galaxy always has spiral structure, only it is made up of different spiral arms (for more information, see our press release at National Astronomy Meeting 2011, http://www.ras.org.uk/news-and-press/217-news2011/1967-new-theory-of-evolution-for-spiral-galaxy-arms). This violates the first predictions of density wave theory stated above.

Another recent finding is that the spiral arms co-rotate with the stellar disc at all radii i.e. the pattern speed matches the rotation curve of stars. This is in contrast to the constant pattern speed of rigid rotation (point 2), and leads to the spiral arms winding up over time and their eventual disruption. This difference has implications for the way stars move around the galaxy with respect to the spiral arm (point 3): for the constant pattern speed we expect stars that are born in the spiral arm away from the single co-rotation radius to move further from the spiral arm as they age. However, for the co-rotating spiral arm the stars move at the same speed as the spiral at all radii, so we should expect no such gradient. This gives us a well-defined prediction that can be tested by examining the distribution of star forming tracers across the spiral arm. Because of the star formation recipe in GCD+, we were able to test the distribution of young star particles across the spiral and we found that there was no such gradient, thus indicating that the spiral arm is co-rotating with the stars. This conclusion has been corroborated observationally by my MSSL colleague, Ignacio Ferreras in 2012, who traced the distribution of star clusters of different ages in M100 and found no offset between them (see Fig. 2).

In my opinion, one of the most interesting effects of the co-rotating spiral arm is that on the motions of stars, specifically the radial migration of stars. This refers to the change in a star’s angular momentum or “home radius”, meaning that stars (even the Sun at R=26 000 light years) can change their radial position by up to several thousand light years within a galactic rotation. In short, stars can be transported from the inner to the outer regions of the galaxy and vice versa via torques supplied by the spiral arm, but because the stars are allowed to spend relatively long amounts of time close to the spiral arm (thanks to the very similar rotation speeds of stars and spiral), this may happen at every radius, leading to rapid mixing of stars throughout the entire galaxy. This is a really hot and extensive topic that may have important evolutionary consequences for galactic disc thickening and metal distribution profiles for example. Each is a topic in its own right, which gives an indication of the strong impact the spiral arms have on galactic evolution.

In summary, I hope that this compendium of research highlights has given a glimpse of the power of high resolution self-consistent simulations, and their ability to go past the linear perturbation approach. The evidence against density wave theory and the overall dynamical behaviour seen in the simulations hint that the underlying nature of the spiral arm is much more complicated and non-linear than previously thought. This, together with ever increasing computational resources, makes numerical simulations a perfect setting in which to progress our understanding of galactic evolution, especially in combination with future observational data from Gaia and ALMA.

Hi, I’m Richelle Grisdale, and I started my PhD at MSSL about a year ago. Here’s a short summary of how it’s going so far, and what my life is like on a daily basis.

When I arrived at MSSL, I absolutely loved its lovely surroundings and the beautiful old house. I was also really looking forward to starting my project and working more independently than at undergraduate. I met my supervisor, and started work. The first few days were pretty confusing, but everyone was very friendly and it was easy to settle in to life at MSSL. My first month was spend studying by reading reviews, and becoming best friends with a very useful book called Galactic Dynamics.

Now I’m one year into my PhD. I’ve made a nice start on my project, and gotten very used to life at MSSL. In a typical week I leave my house at about 8:30 to 9am most mornings, and it takes me about 45 minutes to cycle the 6 miles to MSSL. It’s a lovely ride to the countryside. I then start with a cup of tea, and continue working on what I was doing the evening before. I meet with my supervisor about once a week, and we discuss the work I’ve done that week, which direction I should take it next, and what work I should concentrate on.

Every week we also have a series of meetings. Every other Wednesday there is journal club. Here one person picks a recent paper that they found interesting, and describes it to the others. I find it’s a great way of broadening my knowledge beyond what my project is about. On Thursdays we have a small meeting, called the Gaia meeting. This is a meeting of people who work on something to do with Gaia, and we discuss anything Gaia related. There are also regular seminars. These vary widely, some are very good, while others are quite difficult to follow!

Currently I am in Tenerife, at a summer school all about the Milky Way. One of the greatest things of being a PhD student is that you are constantly learning new things. Being at one of these summer schools is great fun, you get to meet lots of fellow astrophysics PhD students, and make new contacts. There were also a lot of very interesting lectures. These were extremely helpful as they provided me with many good references for my upcoming upgrade report.

In short, the life of a PhD student is pretty cool! You learn lots of interesting things, get to do independent research, and fly to cool places like Tenerife to do it! 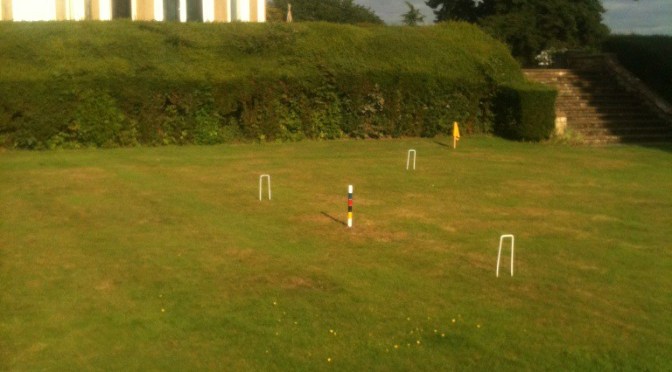 One of the nice things about working at MSSL is that the department consists not only of the building in which we work, but also the grounds in which it lies. This is particularly enjoyable during the summer, for example one can eat outside at lunchtime talking about science and looking at the amazing views for inspiration; if there is a long paper to read there are many places to sit in peace in the fresh air. MSSL also remarkably has a outdoor swimming pool (perhaps we will blog about that in the future), which is not too cold(!), and nice to use on really hot days. The various lawns in the grounds are also put to good use, football is played regularly, and in the summer the department has a Croquet tournament!

Before this summer I had never before played croquet in my life, so it was with a sense of trepidation that we formed the team Mullard Cosmology Croquet (MC^2), myself together with Dr Jason McEwen. However after the first game I realised that it is a wonderfully game, from quite simple rules very complex matches can result, full of strategy and tactics.

The tournament at MSSL is regularly held each summer, and its a really nice way for the different groups in the department to mix. Neville Shane is the tournament organiser and all the information is posted on a nice website here. The game we play is Garden croquet, which is the most common variant of the rules played; teams consist of two players that take it in turns to hit the ball through a series of hoops. The interesting aspect, that causes many complicated playing scenarios, is that if one hits another players ball then this results in two shots, the first of which can be used to move that players ball for example.

The tournament structure has two group stages, in which each team plays every other team in the group. The winner and runner up of each group plays the runner up and winner of the other group in the semi-finals, followed by a final show down. The MC^2 team somehow (with a good dose of luck) has managed to get through to the final, with some really close games.

Having such group activities in a department is very important. It creates a sense of community, it builds friendships, all things that a good science department should have. I’ve thoroughly enjoyed my croquet experiences so far, and will certainly look forward to getting out on the lawn next year.